Elektronik Product of the Year 2018

Elektronik Product of the Year 2018

SunLike, which won the Product of the Year Award from Elektronik 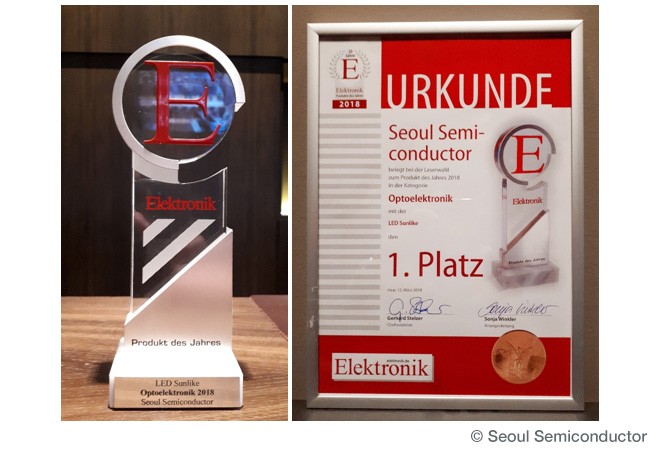 On 26 March 2018 the German magazine Elektronik,specialized in electronic components, awarded the first prize to “The Light Closest to the Sun” LED “SunLike” by Seoul semiconductor in the “Elektronik Product of the Year 2018” category. SunLike using TRI-R component is the core technology developed by Toshiba Materials, and it was presented in Europe in June 2017. Considering the numerous influential lighting brands and the potentialities of the market, the present award is an important recognition.


Elektronik Product of the Year 2018

Elektronik is a German magazine publishing large numbers of issues each year, renowned for its tradition and authority in the field of electronic components. For 20 years, subscribers have been asked to answer an annual survey about “the most original and innovative technological product”. Representatives of the business world selected SunLike as the technology exerting the most favorable effects assigning both the commemorative trophy and certificate. The 20th anniversary event was held in Munich at “Ketterer Kunst” Gallery and Auction House, near the Messe München Fairground, where 34 prizes were awarded for 11 categories.

Seoul Semiconductor is a corporation ranked in 4th place in the global market of LED components (2017 performance). It owes more than 12,000 patent portfolio and produces goods in lighting, automotive industry, IT and UV field, adapting with flexibility to the rapid changes of the market. In particular, the package-free “Wicop” LED; the high voltage LED technology “Acrich”; “nPola”, ten times brighter than the conventional LED; the most advanced UV technology “Violeds”; filament LED technology radiating in all directions; “Acrich COB”, using the most integrated circuit technology “MJT: Multi Junction Technology” equipped with COB (Chip On Board); “SunLike: The Light Closest to the Sun” LED. With these and several more technologies, Seoul Semiconductor is a leading company in the world of LED.

: The link of this icon opens in a new browser window.
To the top of this page